CANOPY TOUR BEFORE WE DEPART FOR GUATEMALA

ANZAC DAY - LEST WE FORGET.

Up earlish, had breakfast and then Lyn & I headed to the bus stop. We caught a chicken bus US$0.50 each to the village of Apaneca to do a spot of zip lining. We were early, by just under an hour but as we were the only ones booked to go in this time slot they took our money US$35 each, geared us up and loaded us into the back of a small truck, which had seats.

We drove up a nearby mountain for about 20 minutes. The dirt road way rough and steep and I was glad we did not have to walk up as the truck was struggling also. First photo was taken from a view point overlooking the village and surrounding cloud forest, then we had to climb close to 100 dirt steps to reach the first zip line. Not necessarily pros just yet, but as we have now done this a few times in various countries we sort of know what to expect and are not completely overtaken by fear.

The first 3 lines were a sort of practice run and I guess it shows the guides how experienced the rider is or how they react. I say guides because they numbered 8 plus the truck driver = 9! Before the start we were given a short safety talk that was translated to us by one of the guides that spoke very good English.

Zip lining is always great fun and although the platforms were not super high up in the trees, we did cross over a very high valley 3 times which was very high and gave us fantastic views.

We caught a couple of drops of rain but not enough to made any difference. Back at the office they showed us the photos one of our guides had taken as we had opted to purchase these instead of taking my camera and having to worry about it. For just US$10 we got 16 photos that they sent to my facebook page and we also received a dvd with the photos on. Fun time. 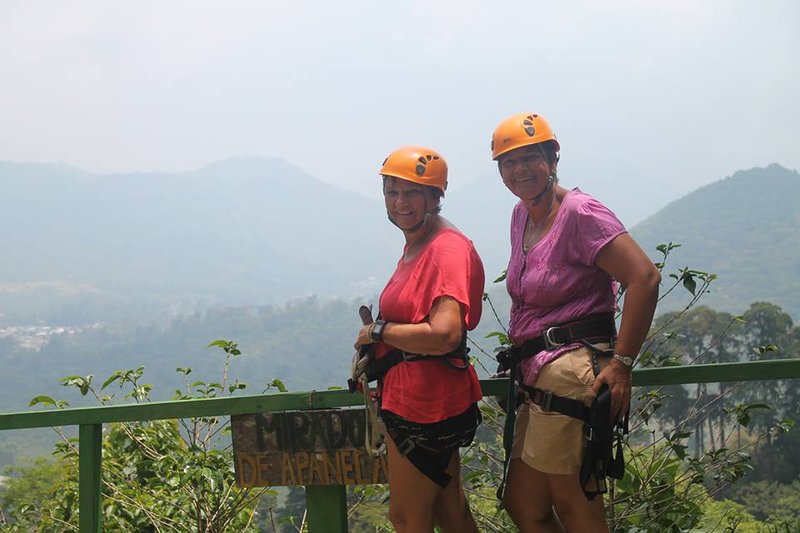 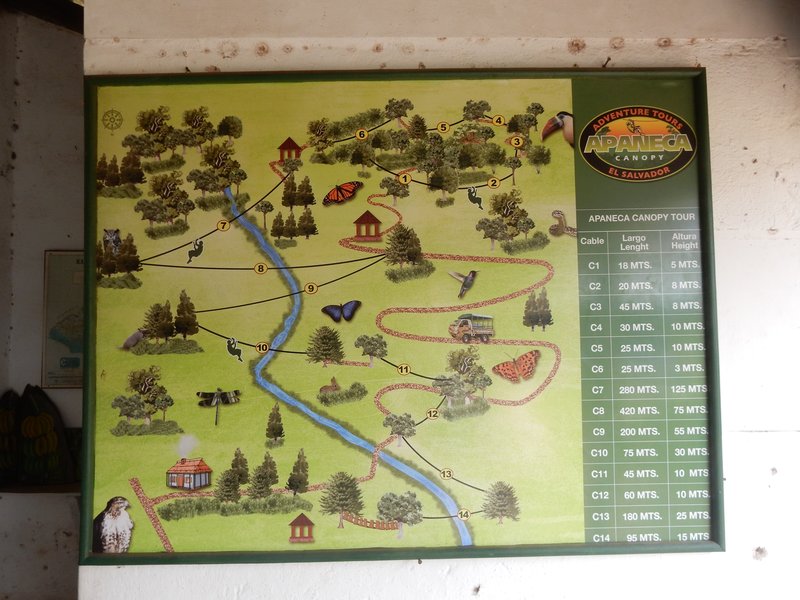 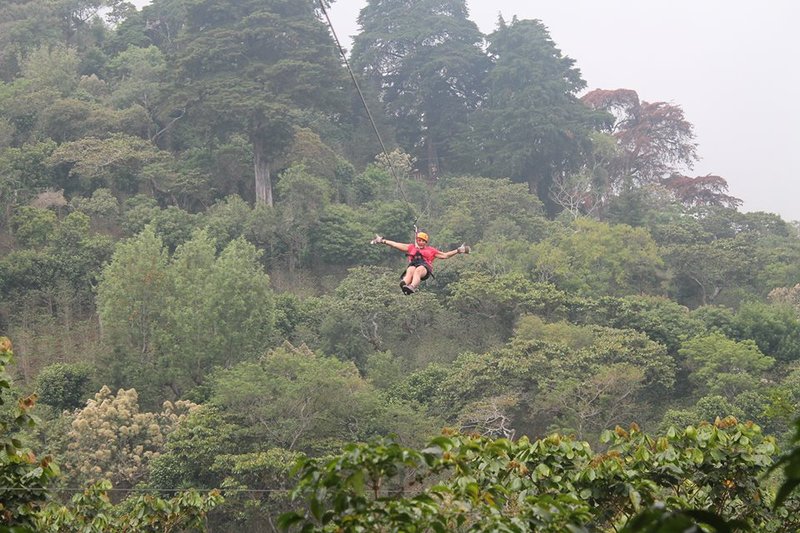 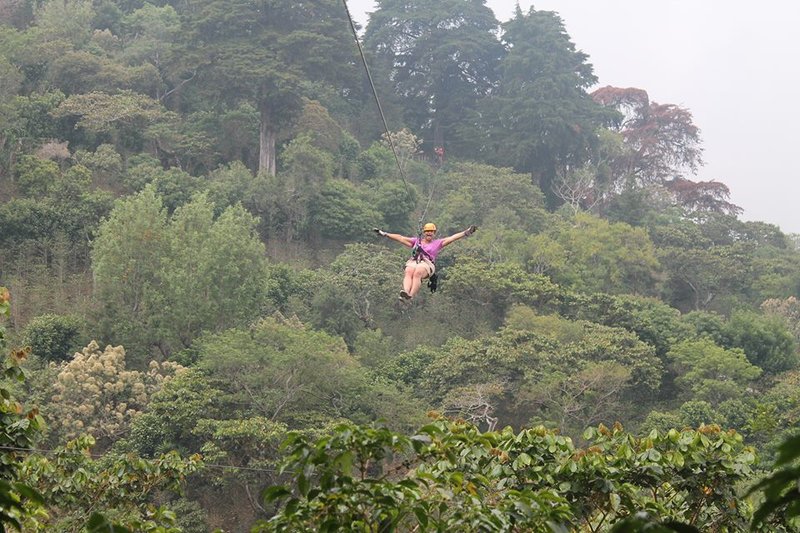 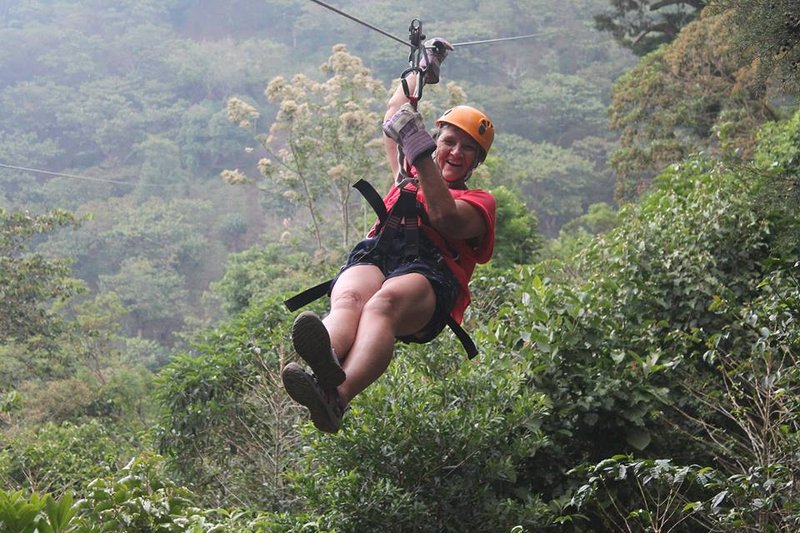 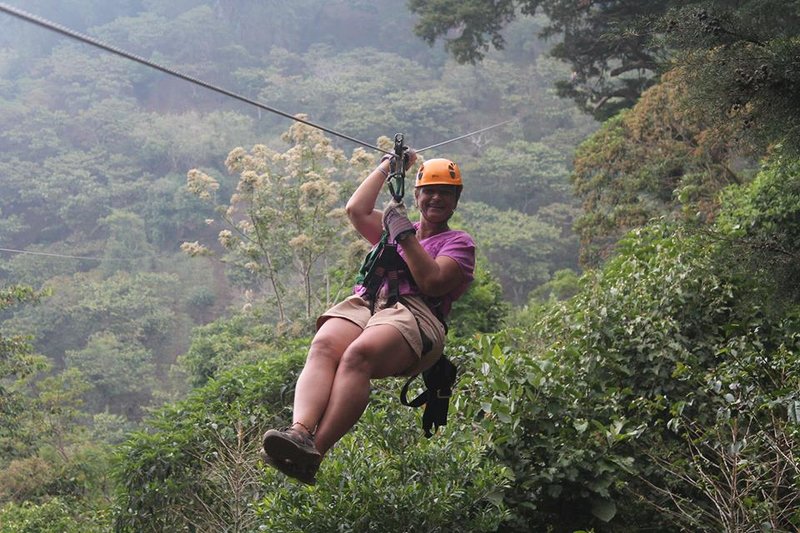 Lyn & I walked back to the main street to wait for the bus and had to shelter under a shop awning as it had started to rain again a little heavier this time. 10 minutes and it was all over again and the road did not even look wet. Eventually a chicken bus came round and we flagged it down and were charged US$0.40c each for the return journey. Sometimes I think the driver or conductor is just too lazy to give us change, and we do not know the correct price of the fares. However they are very cheap even at the inflated gringo price.

Back at the hostel where Dolly was waiting for our return, we had a cup of tea/coffee then headed out to find some lunch. There were a lot of places closed so we had great difficulty in finding anywhere to eat. Settled for a pupusa stand and had 2 for US$1. Dolly not so impressed with our choice. 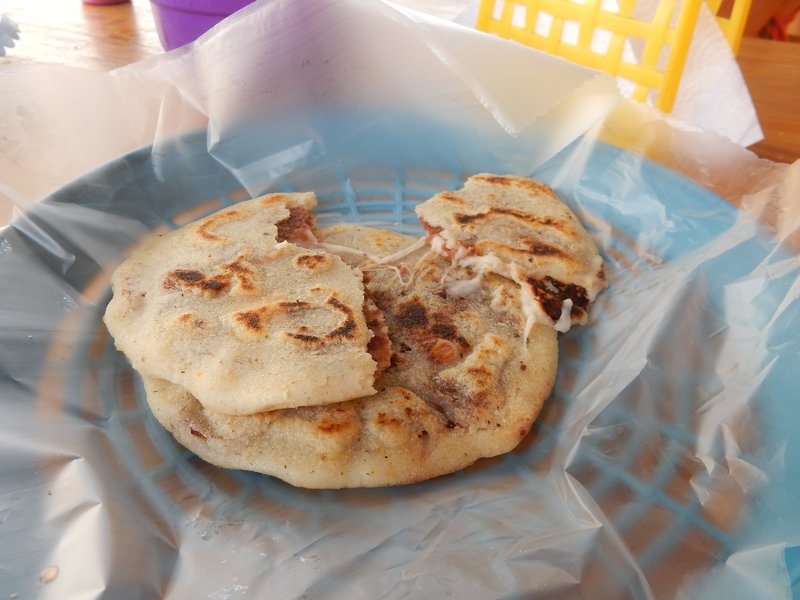 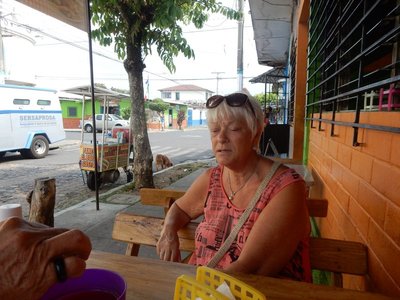 Back at the hostel again and we had arranged for a guide to come and escort us to the local waterfalls. We had been advised that it was not particularly safe to go alone and there was a notice up in the hostel about some tourists who had gone alone and been robbed. Not sure if this was a tactic to hire a guide but at US$2 each it did not seem worth the chance. And we did not really know exactly the way anyway. So we set off from the hostel at about 3.30pm with the worlds shortest guide who did not speak a word of English and the 2 hostel dogs in tow.

It was supposed to be just a short distance but after about 25 minutes of walking and the track started to get very steep as it descended into a deep valley and Dolly decided she was not going to go any further in fear that she would not be able to back in back up the track. Our guide was not happy about leaving her on her own but had little choice but to continue on with Lyn & I. Unknown to us the guide had telephoned on his mobile to his brother who was nearby to come directly and look after Dolly. Of course none of this could be relayed to us due to the language barrier. Dolly informed us later that she got a hell of a fright when this bloke turned up carrying a machete and started to loiter around her after explaining himself in Spanish which of course she did not understand. He obviously got the vibe and stood watching her from a distance. It was not until we returned with the guide and he said it was his brother William that we understood what he had done.

Anyway Lyn & I continued on to the waterfalls and braved the very cold water for a cooling off dip. Yes it was fresh, but not unbearably so. It was a bit of a hike back up the hill, followed by the walk back into town. We were back at the hostel about 5.30pm, so about 2 hours later. We ended up giving the guide US$10 for his trouble and patience and for the fact that he had called his brother to watch out for Dolly. 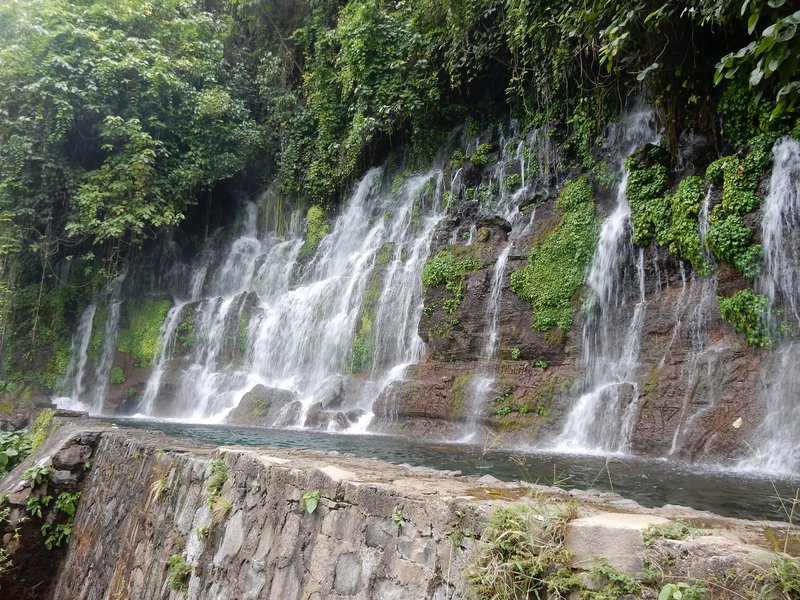 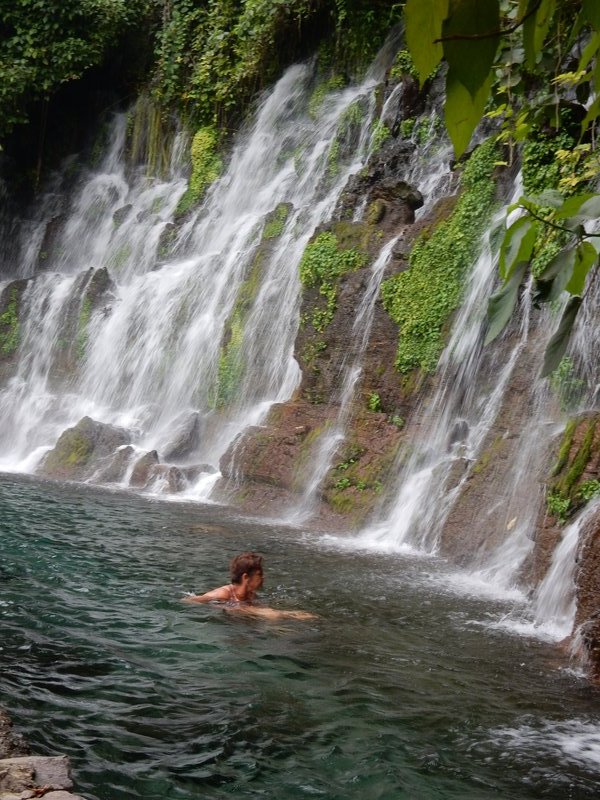 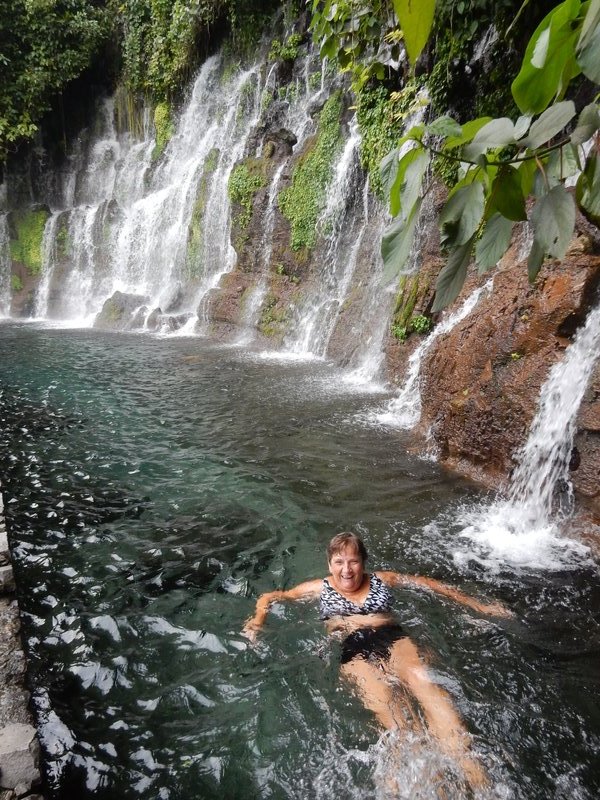 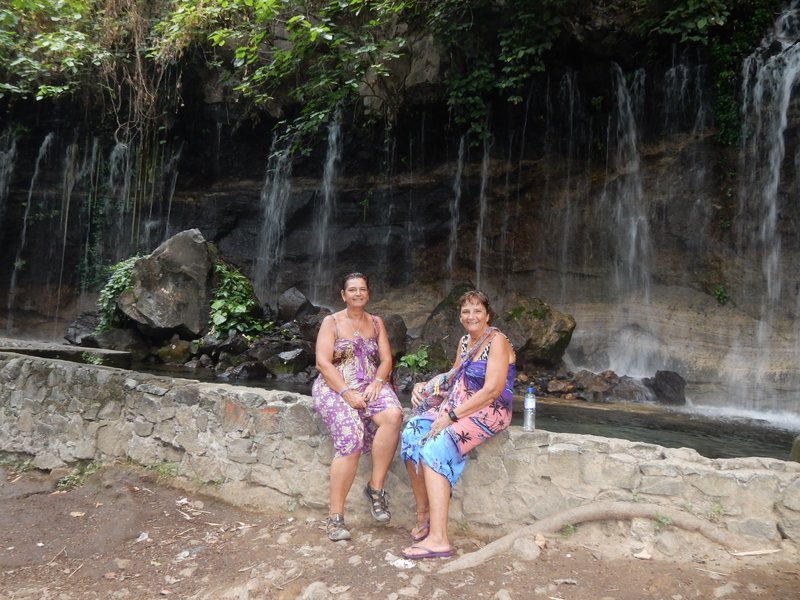 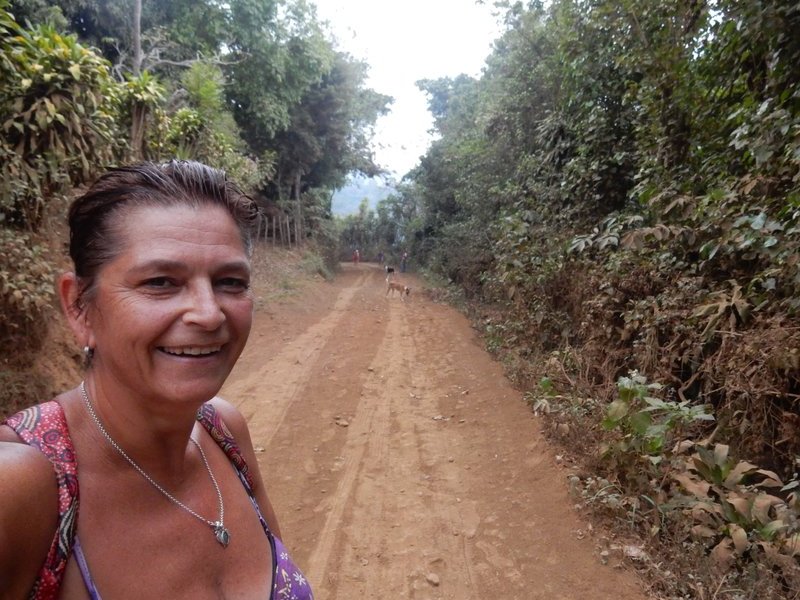 So it was a full day today, and we decided to go out for dinner as it was our last night in El Salvador as well. We went to one of the poshest restaurants in town and had a really nice meal. Probably the most flash restaurant we have been to all trip, and the bill for our 3 meals and beers came to just US$26. 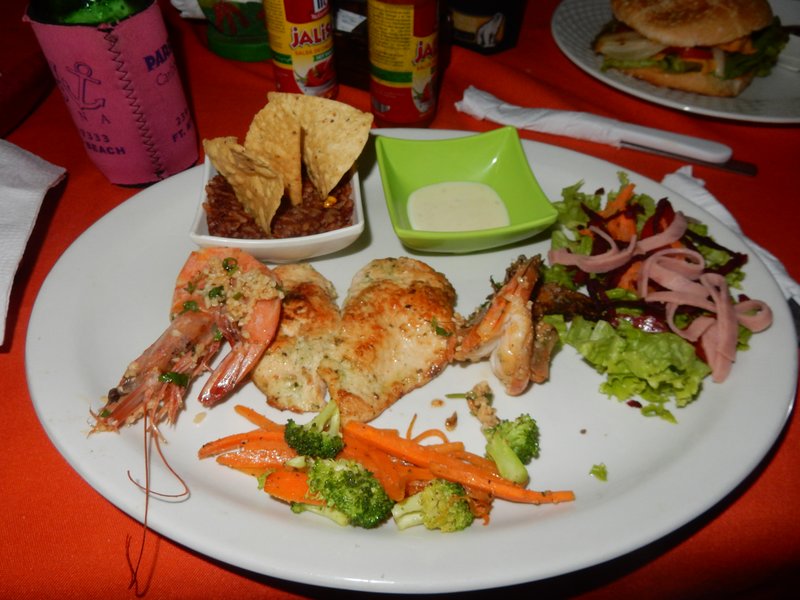 Tomorrow we have another chicken bus day as we depart El Salvador and move on into Guatemala.