OUR LAST DAYS IN NICARAGUA

Scrambled eggs, with toasted bread roll this morning, was something a bit different. Eggs and the view were nice. It's Palm Sunday today, so being in a Catholic country that is a big deal. We could hear the fireworks going off all during breakfast and we could see crowds and movement down at the Cathedral. Not motivated enough by the religious significance to go have a look, we just enjoyed the view from our balcony while eating breakfast.

Finished packing our bags we deposited them down by reception and checked out of our room. We are catching the 3pm bus to Leon so have time to kill until then. We are going to try to visit the lookout again today, after our failed attempt yesterday arriving after the gates had closed at 5pm.
The first taxi I flagged down and that we climbed into wanted to charge 200 Cordoba's = A$ 8.86 each way, this was not acceptable and we exited his vehicle in a hurry.

Next taxi was happy to take us for 100 Cordoba's = A$4.43 each way (same price as we paid yesterday) and I managed to con him into waiting for us at the top for 10 minutes before he drove us back down. View from the lookout was pretty awesome. You could see the whole valley with the town of Matagalpa sitting in its base, with housing crawling up the slops of the surrounding mountains. This area is supposed to be a major coffee area but we still did not see any coffee plantations from this vantage point either. 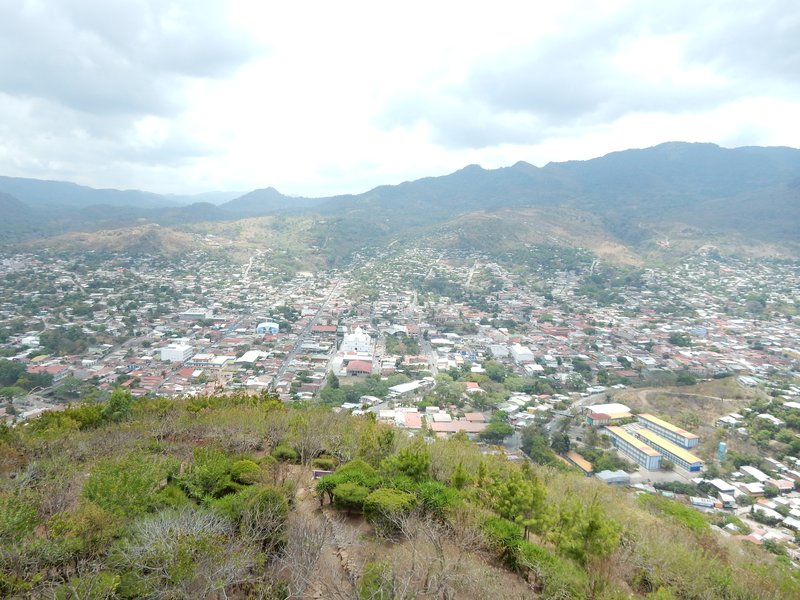 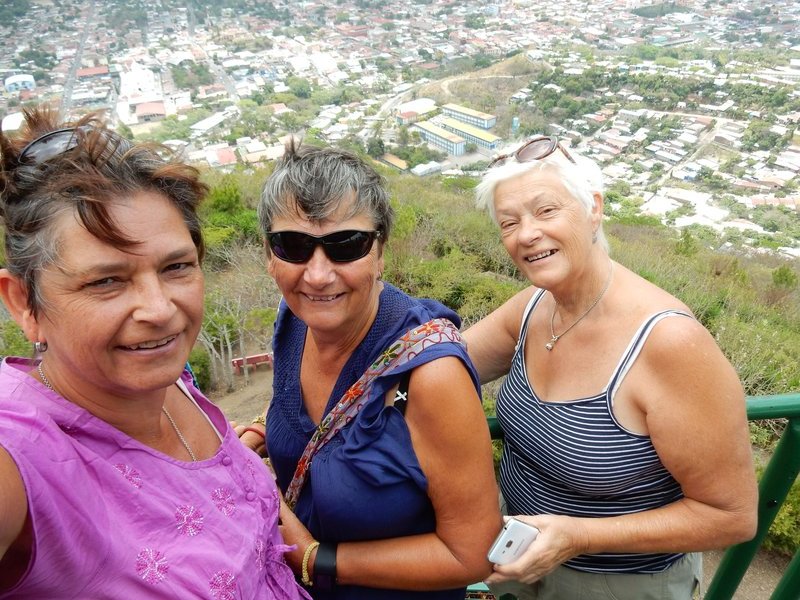 Our ride took us back into the centre of town and was happy when he received the 200 Cordoba's = A$8.86 for his trouble. Still with lots of time to kill we went in search of the coffee museum which was supposed to be ok if you got a couple of hours to kill, which we did. Managed to find it but the gate was closed and there was a lady there who told us the museum was closed today. Why have staff there just to tell punters that the place is closed? Very odd. So we had a bit of a wander around the shops, sat in the square watching the proceedings. The overflowing cathedral was holding mass until 12.30 when suddenly all the ice cream vendors went into a frenzy trying to attract the exiting church patrols.

We had lunch of a enchilada and a cold drink at one of the food shacks in the square. Dolly as usually was not impressed with the food, she does not like tortillas in any way shape or form, so this was not a very appetizing lunch for her. Not to waste the food, she gave hers to a beggar that was hovering nearby the food shacks. 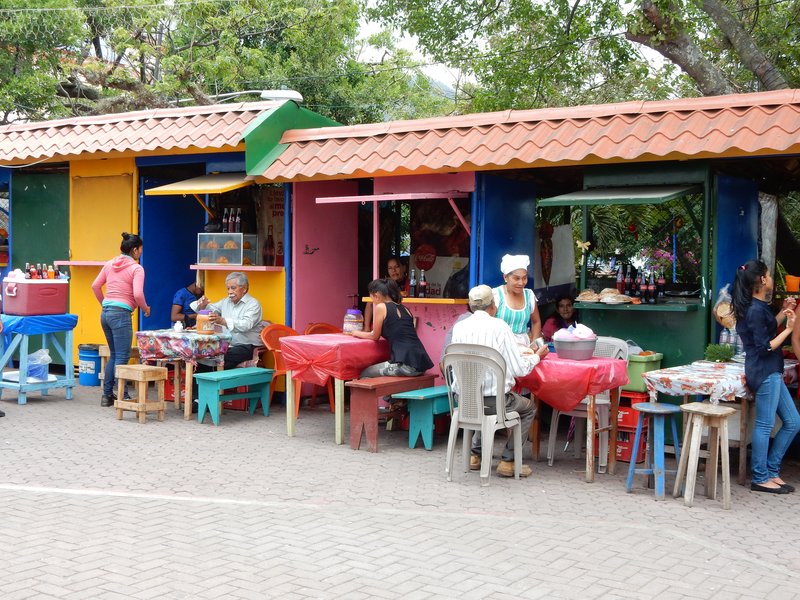 Back at the hotel to collect our luggage I think they were trying to tell us that they wanted to charge us a fee for having left our luggage. So this is a good time to confirm that we don't understand any Spanish. She could not get herself understood so just ended up giving up and watched us as we left the hotel with our luggage.

On the street it was impossible to flag an empty taxi, the cleaning lady suggested we walk down the street and as luck would have it an empty taxi pulled up. To the bus station sur (south) please! Ten minutes later we were there with just 1.5 hours to wait for the bus to Leon. Yes we were way early but I wanted to be waiting here at the station rather than somewhere else and not get on the bus. 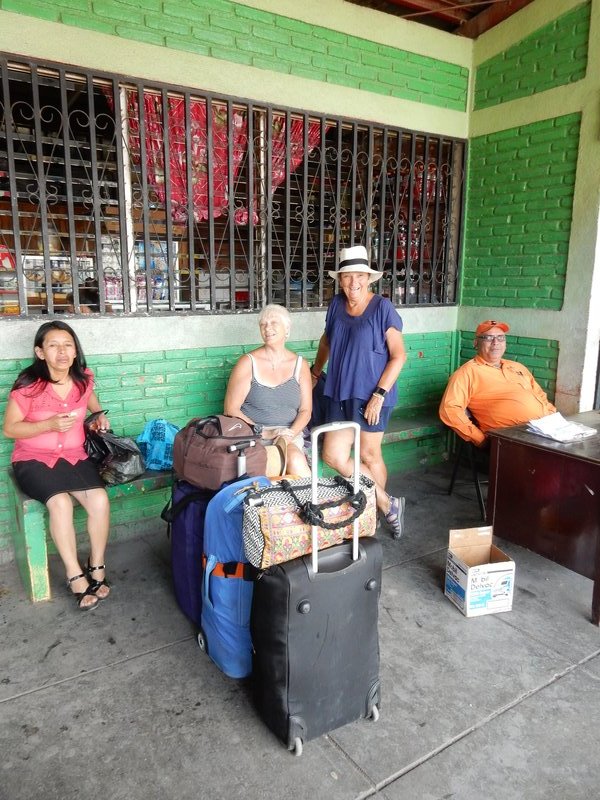 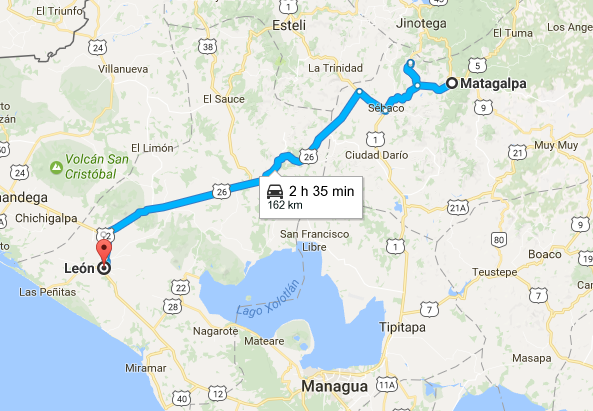 Our chicken bus departed on time at 3pm and it was not nearly full so we all had seats. It was a pretty good ride as they played all English speaking music (which is unusual) and it was not too hot in the bus. The fare was C$75 = A$A$3.32 each and we did not get stung anything for the luggage. The bus pulled into Leon bus terminal about 5.30pm and we found a taxi to take us to the hostel I had pre booked. 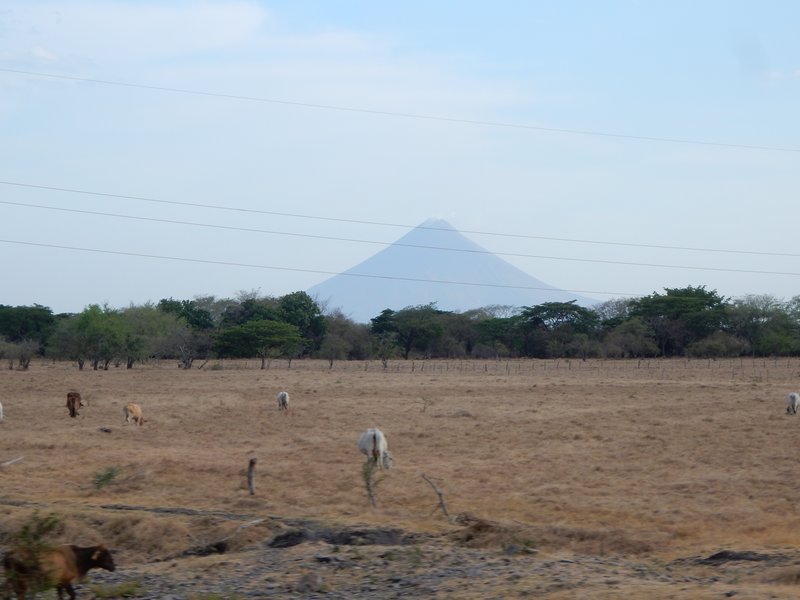 Lazybones Hostel - triple room US$28, shared bathroom & no breakfast, no kitchen, but has a pool. Turns out our room is ok but the toilet and shower is down then up 29 steps, so a little far for the ones that need to go in the middle of the night. So not a good choice, but I did not know this and lots of places were already booked out in Leon so just going to have to live with it.

Bags in room, we headed out straight away to find a cold beer, of which we did in a sleazy bar, but the beer was cold and cheap so all good. Feeling a little more refreshed we had a walk around, stopping for a easy pizza/hot dog dinner before another beer in the main square next to the cathedral. It was dark by now but lots of people out and about for a Sunday night. There is a bit of a breeze tonight so not so bad as we have been told it is hotter here than in Granada.

Bit more of a walk around on our way back to hostel. Dolly and I opted for a dip in the pool in lieu of a shower - to cool and clean off.
Will explore more tomorrow. 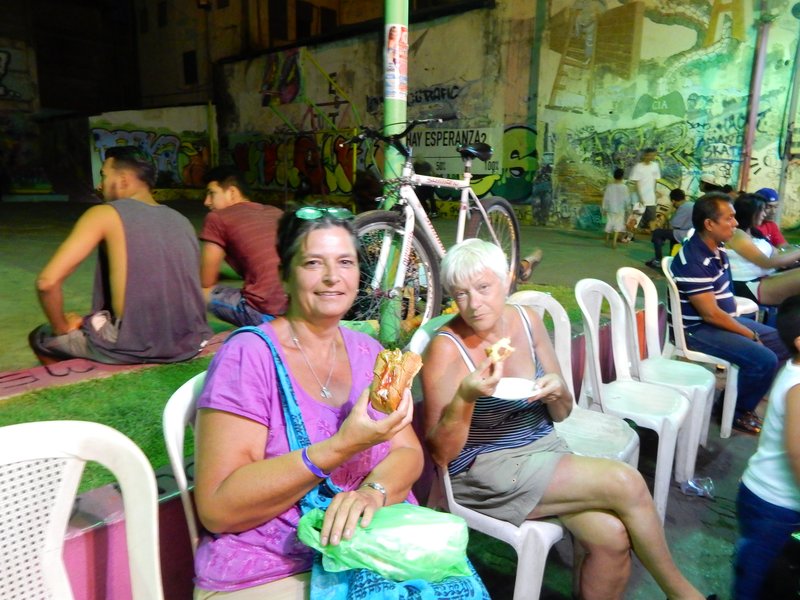 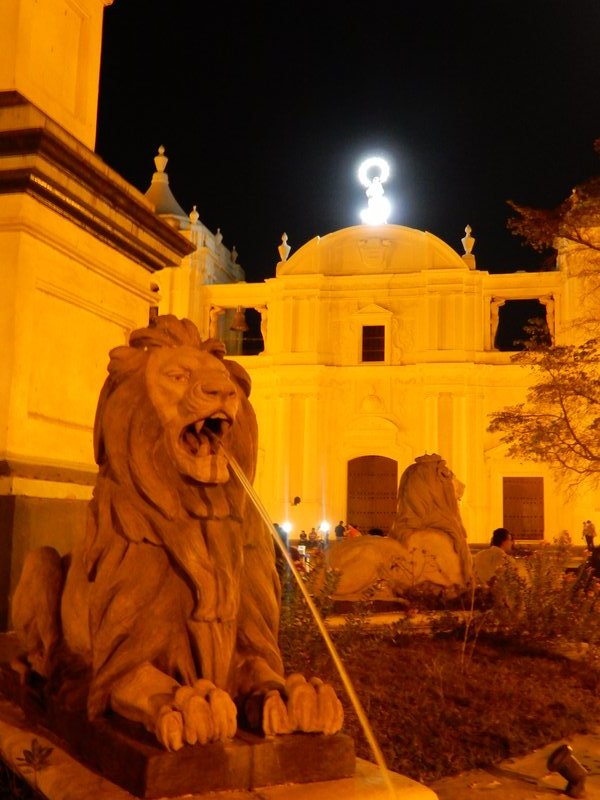 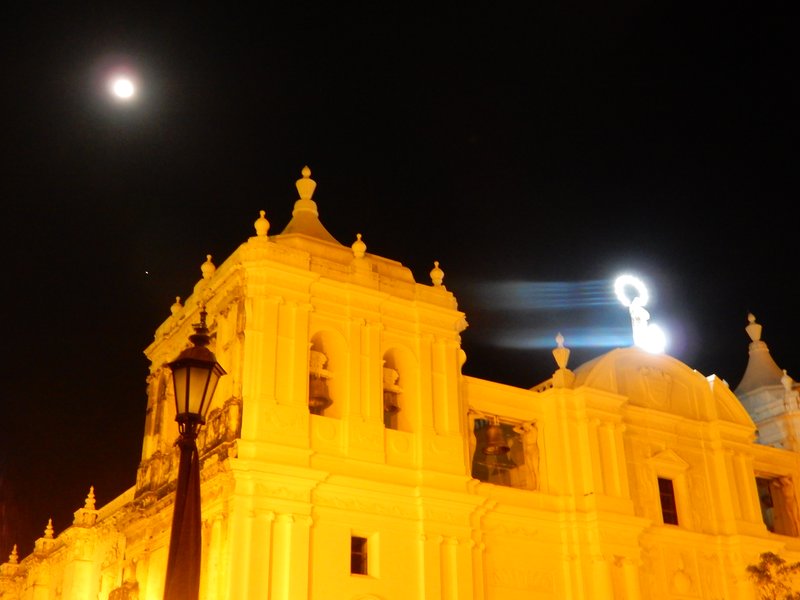 After a relaxing morning at the hostel, no breakfast included here, so just coffee. We still had bread and the tomatoes that I had purchased on the bus yesterday, so that was breakfast. A quick dip in the pool to cool off before we went out to explore a bit of Leon.

It was quite warm, with a little bit of a breeze so not has hot as Granada had been when we were there. We found a supermarket to return to later for supplies and randomly walked the streets.

Yesterday we had seen a rooftop bar that we decided would be nice for a drink and a lookout so we headed in that direction. It was about 2pm and we were the only patrons enjoying a bucket of Victoria Frost buy 6 pay for 5! We also had some overpriced chicken wings to nibble on. This was a nice bar but the French owner was doing a big no no while we were there. We saw him pouring cheap rum into the expensive rum bottles that he had on the shelves of his bar. What a scabby bastard, people are paying the price for the top shelf rum and actually getting the cheaper one. Not that there is anything wrong with the cheaper one, that is what we have been buying and drinking, but when you are in a bar and paying for the good stuff you should be getting it. Sorry Mr Frog, but you have been caught out and I am putting you on trip advisor!

Anyway, sufficiently hydrated we took leave to walk around town and spy the many churches dotted around the streets of Leon. We also had a quick stop at the markets where Dolly bought some new bras and we purchased a couple of bandanas.

Went to the office to get some info about our shuttle to El Salvador in a few days but staff had already gone home as it was after 5pm. So that seemed like a good cue for us to have an afternoon bevvie. 4 x 1 litre Viccies later C$50 = A$2.22 each, we were done and trying to stagger back to our hostel. Somehow managed a stop at the supermarket to buy supplies for a sandwich back at the hostel.

Another dip before dinner then relax before bed after our big day out on the town. 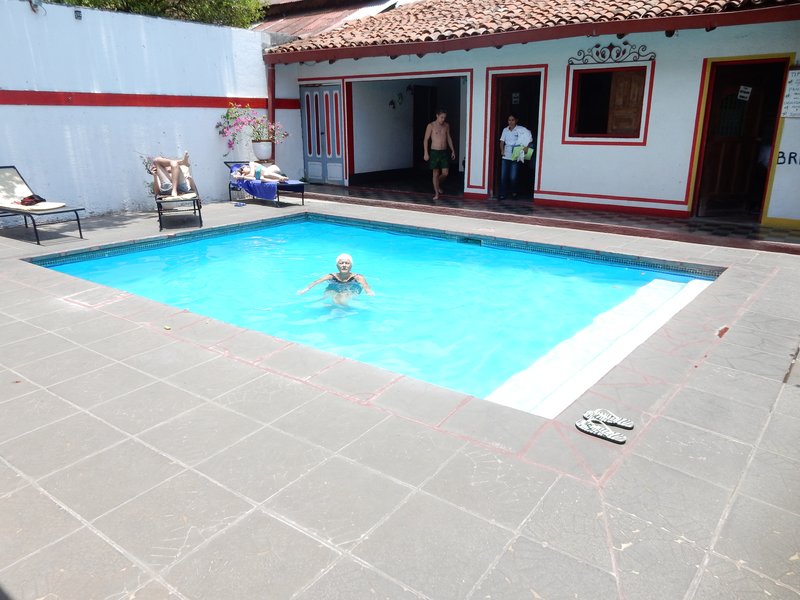 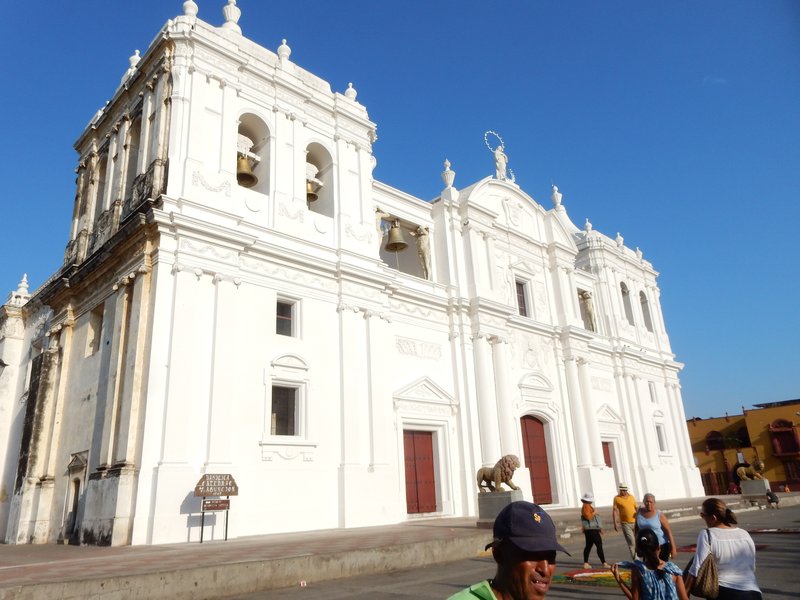 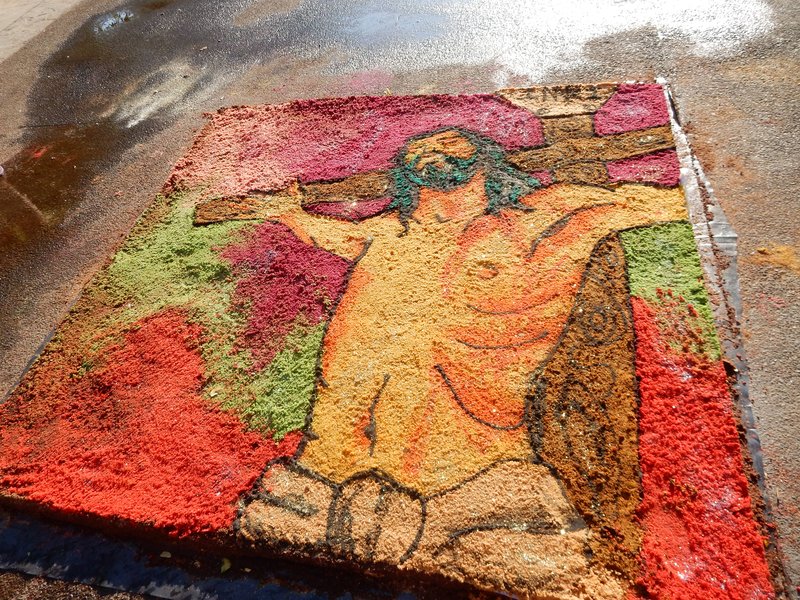 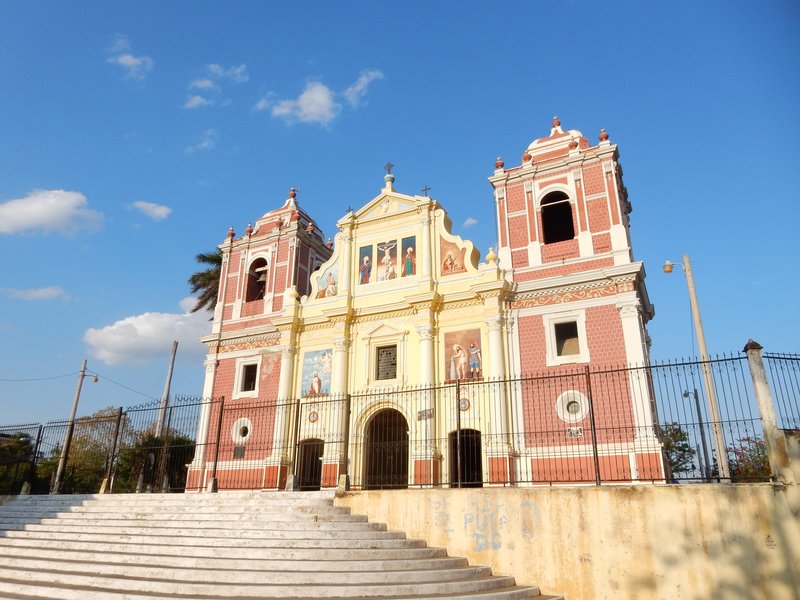 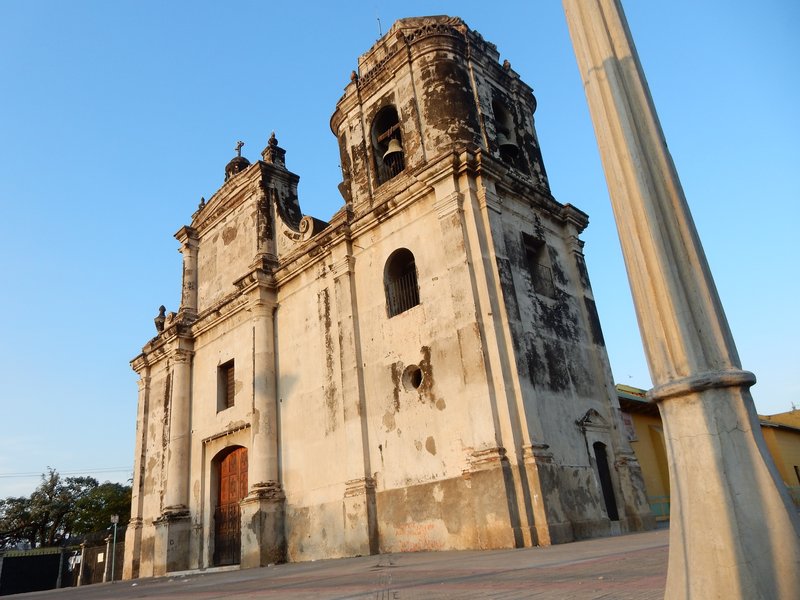 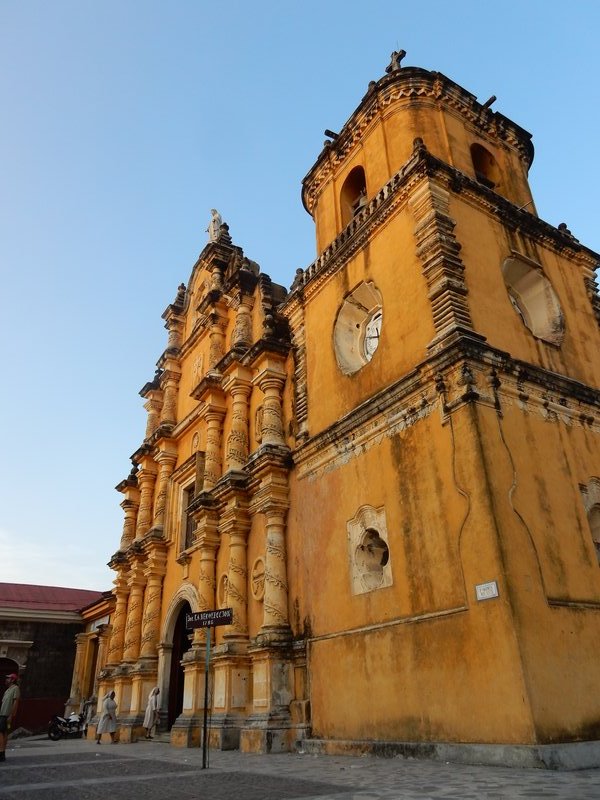 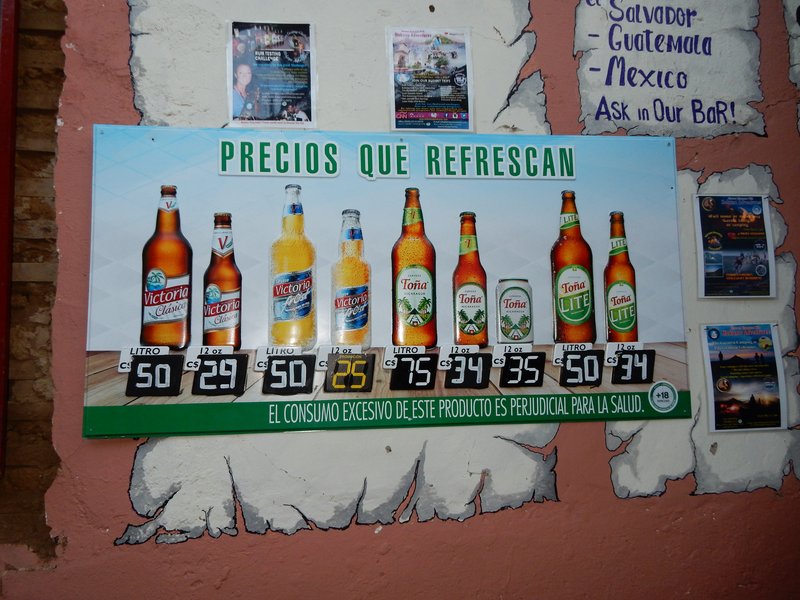 Another hot day in downtown Leon. No breakfast supplied at this hostel so we just had a banana that we'd purchased yesterday from the supermarket. They do have free coffee and hot water for tea until 1pm so at least our caffeine fix is satisfied first up.

As usual we lazed around all morning, using the pool to cool us down before heading out mid afternoon to find some more food. We peeped into a café on the way to central park and Dolly and Lyn spied mash potato so we were going to eat at that establishment even if they served it with dog shit. Which luckily for all of us they did not. Dolly & I had ours with a chicken drumstick served with vegies in a gravy and Lyn opted for shredded chicken and vegies. Have not seen these pair so happy in days! The 3 meals cost us a total of C$145 = A$6.50. 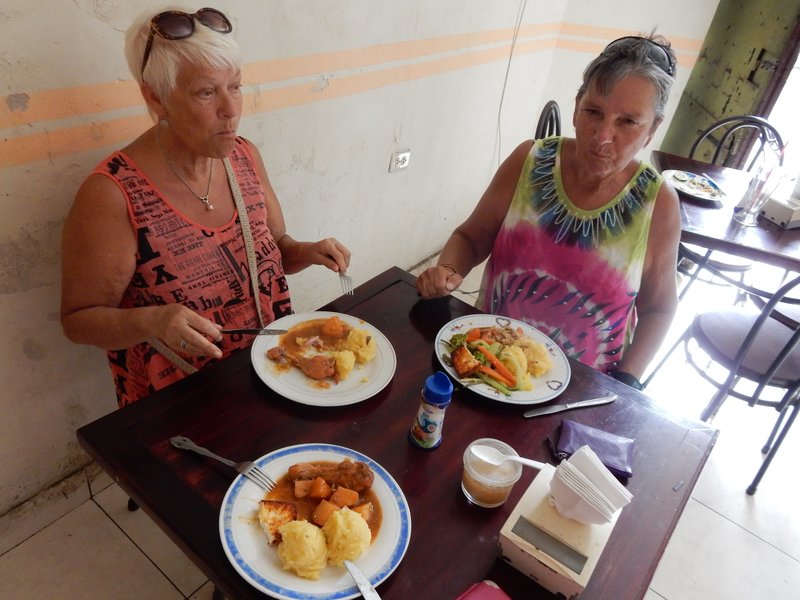 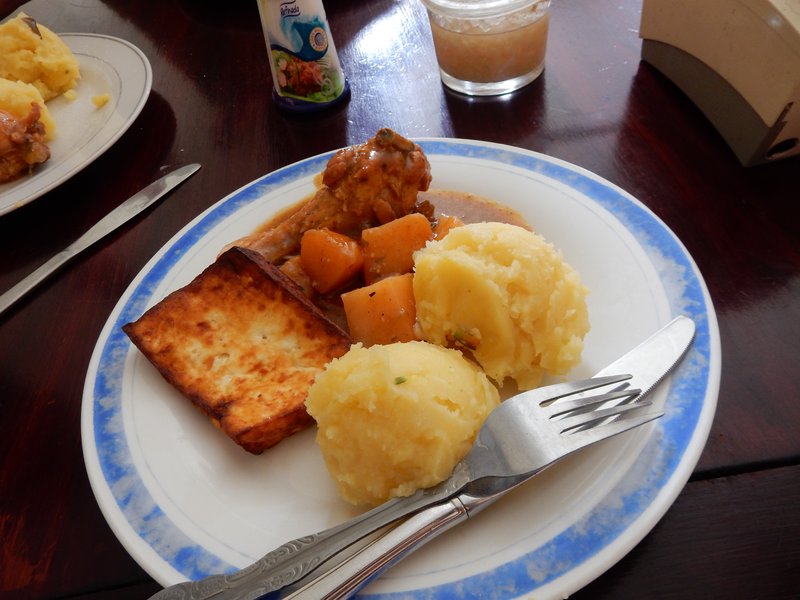 After lunch we walked back to the Gekko Trails office where we booked the shuttle to El Salvador as they sent me an email this morning saying we could spend tomorrow at their hostel after we check out of our accommodation. We wanted to check the address of the hostel so we knew where to take our luggage in the morning. The hostel we are at have signs up saying that guests cannot hang around at the hostel waiting for their shuttle (all shuttles leave either at 8pm or 2pm) claiming they are not a bus terminal. Not very friendly, but fair enough I guess. So loaded with the information of where to go tomorrow we crossed the road to return to the Via Via bar we drank at yesterday, only to be advised they were out of Victoria Frost 1 litre bottles. Well this was enough to lose our patronage and we stood up and left the establishment in disgust.

Walked back to the central square and sat at the café on the square in front of the cathedral. Beers are a little more expensive here C$29 = A$1.30 each, but it's got good people watching traffic so we stayed for 2.

Had a walk around inside the cathedral which is supposed to be the largest in Central America.

Leon Cathedral (Catedral de la Asuncion) is the largest cathedral in Central America. The cathedral is located in the centre of the city of Leon across the street from the city's main plaza. The cathedral opened in 1747, however construction originally began decades years earlier. The cathedral was named to the United Nations Education, Scientific, and Cultural Organization's (UNESCO) World Heritage list in 2011. Tunnels under the cathedral once linked it to other churches throughout the city, however the city now utilizes them for the local sewage system.

Cathedral of Leon The cathedral is most known as the burial place of Ruben Dario. His tomb is located in the centre of Leon Cathedral beneath a white stone statue of a weeping lion. Many of Nicaragua's wealthy and elite are buried beneath the cathedral including Alfonso Cortes, Jose de la Cruz Mena, Miguel Larreynaga, and Salomon de la Selva , however they are not accessible by the public. There is also a courtyard in the middle of the cathedral called Patio de los Principes that has a fountain and flowers. 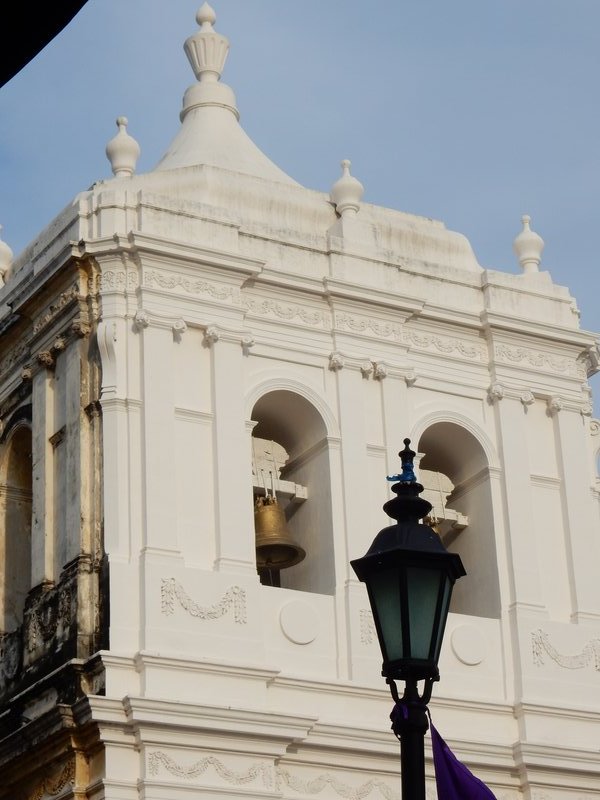 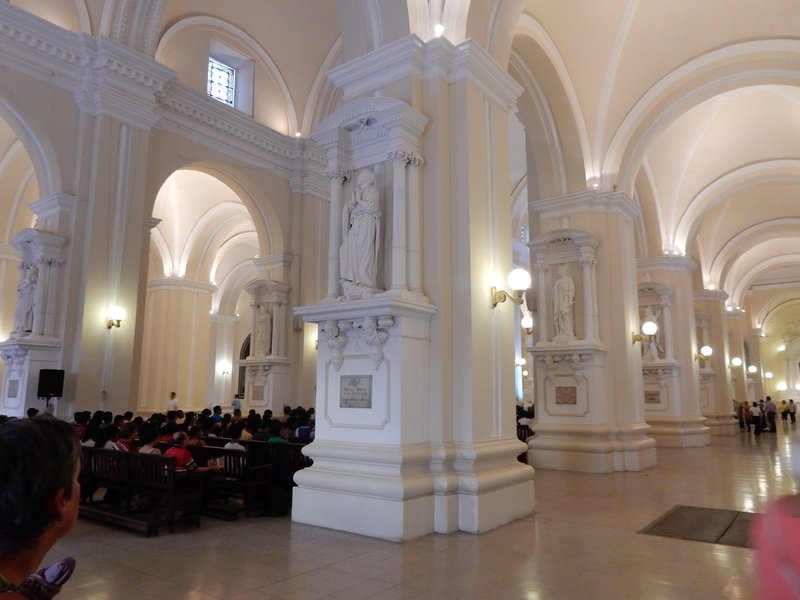 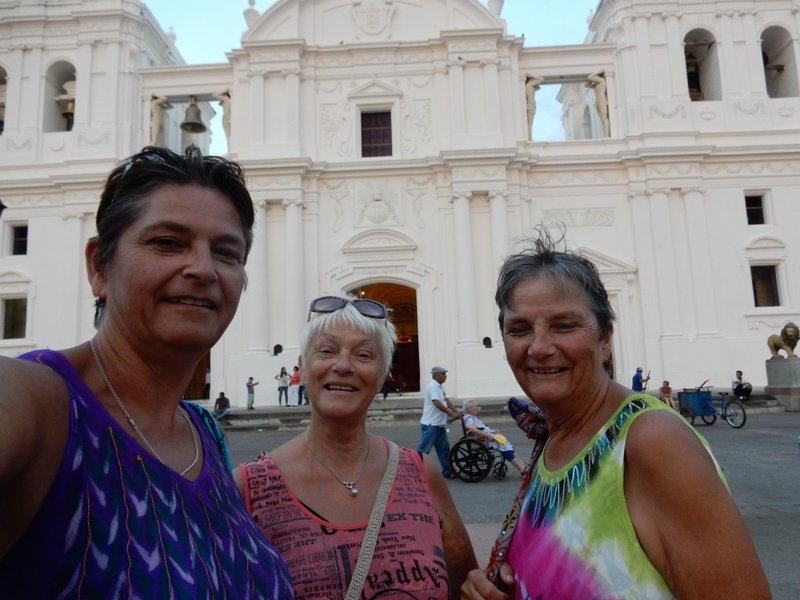 Returned to the hostel before dark for a cooling off swim. It's hotter here today than yesterday even with the small breeze moving the trees. We have been very grateful for the pool here the last few days.
Dinner was sandwiches washed down with a bottle of coconut rum. 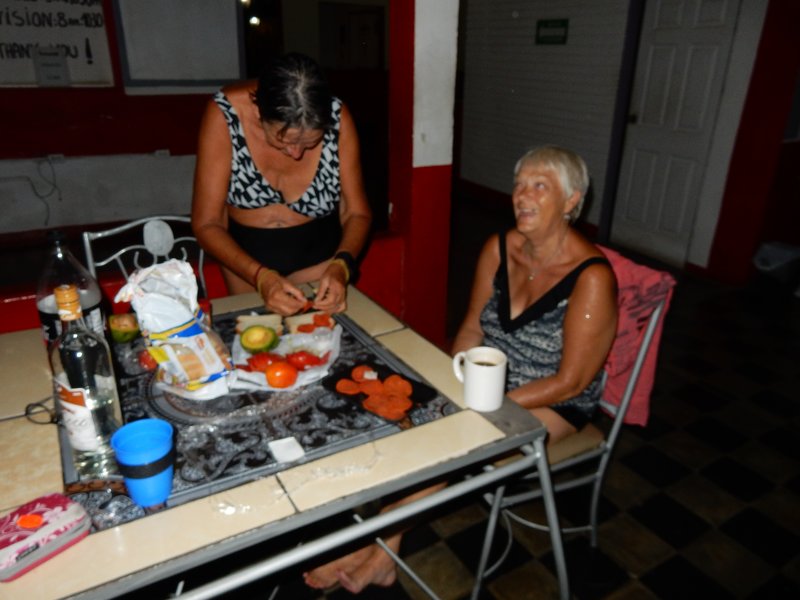