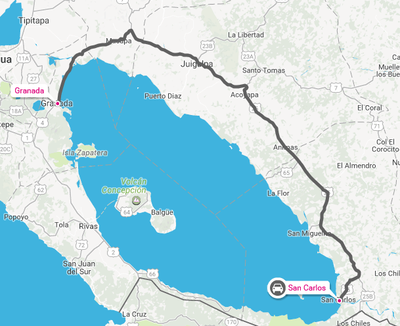 We had a relaxing morning as today is a travel day, but our bus does not depart until 3pm. We hung around at the hotel using the internet until checkout time which was 11am. We were able to leave our bags while we had a last little stroll around town and then back to our usual restaurant for a beer (at 11.30am, is that too early when on holidays?) and something to eat.

We walked via the huge big yellow church on the hill. 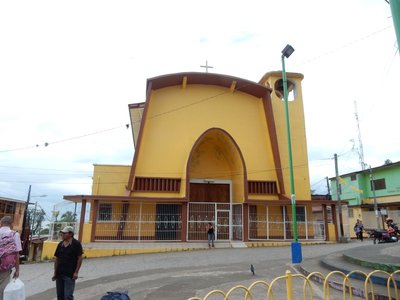 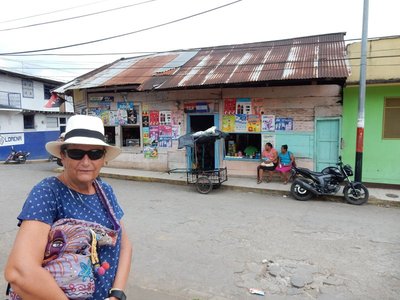 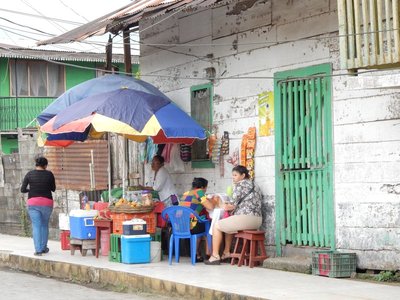 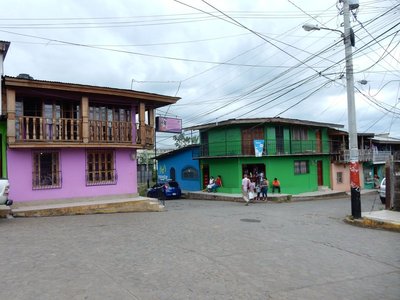 Yesterday while sitting in the restaurant we saw another patron eating chicken wings and chips so this is what we decided to have for our lunch. Lucky when it came to order there were some young Americans there to help us ask for chicken wings. It took 30 minutes for our food to come out but this gave us enough time to finish our beer. Nice every so often to have a meal that does not include rice and beans. Not a bad deal for C$140 = A$6.20 each. 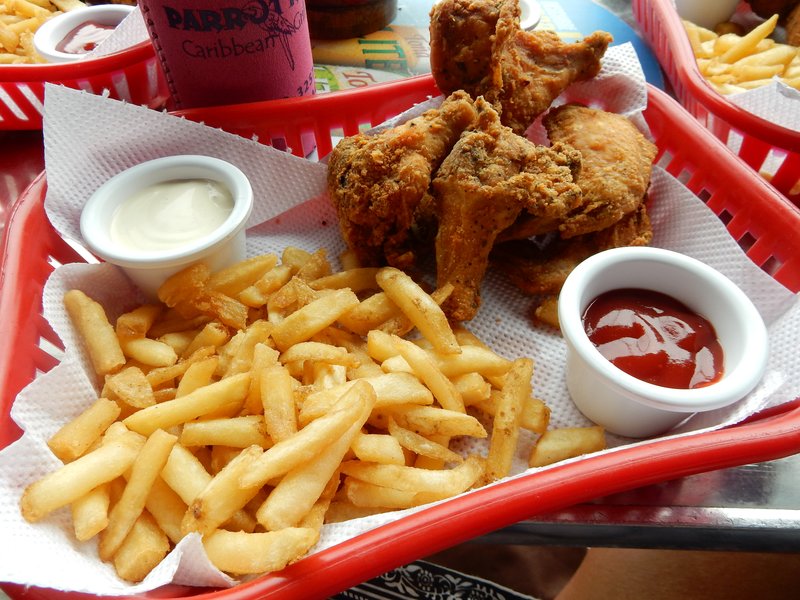 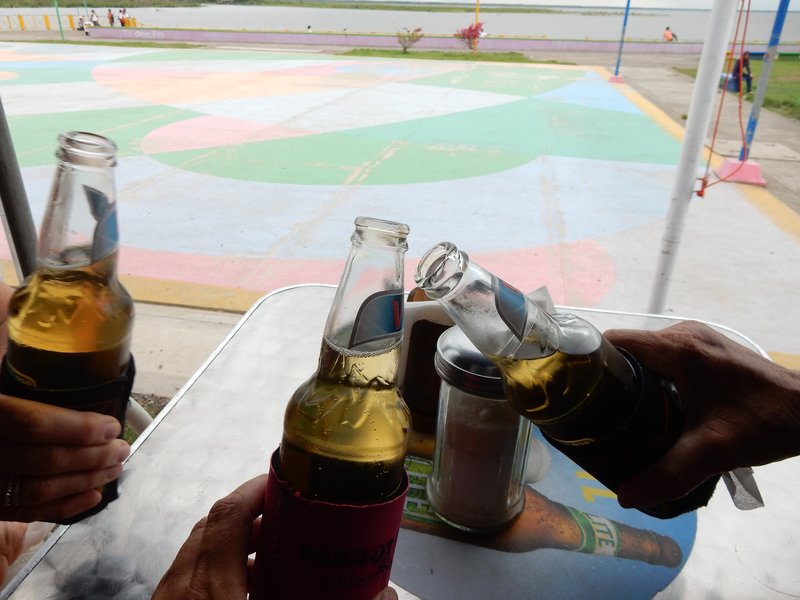 We lingered over lunch until about 1pm when we decided it was time to go collect our luggage. It seemed we had walked this path many times before so it was only just after 1.15pm when we were back in our lunch seats and ordering our last C$19 = A$0.87 Victoria Frost beer, our farewell to San Carlos.

Just after 2pm we dragged our luggage the short distance to the bus station. It seemed that a lot of the shop owners were saying adios to us, perhaps we had stayed in this little stop over town longer than others, or just the fact we had luggage and were leaving they bid us farewell.

We were at the bus station by 2.10pm, lucky there were benches that we were able to sit at and wait for the bus. The station was a hive of activity, surrounded by shops and swarming with walking vendors selling everything from food, drinks, fake jewellery and belts to a lady (who was in great need of her own product) selling bras! 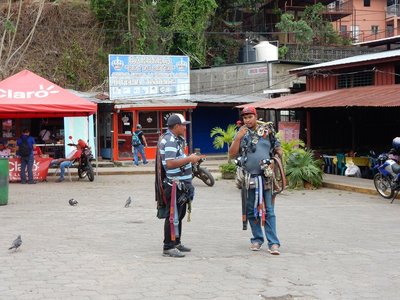 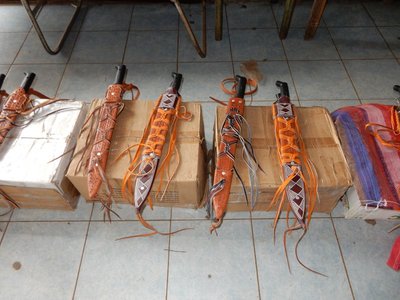 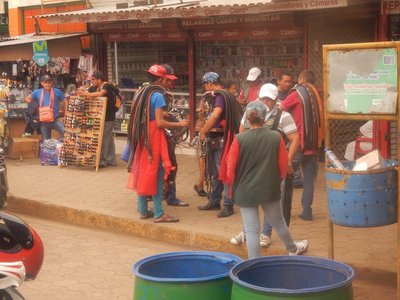 I had a walk around taking a few photos of some colourful chicken buses, not realizing that just before 3pm we were instructed to board one of these un-coach like machines. 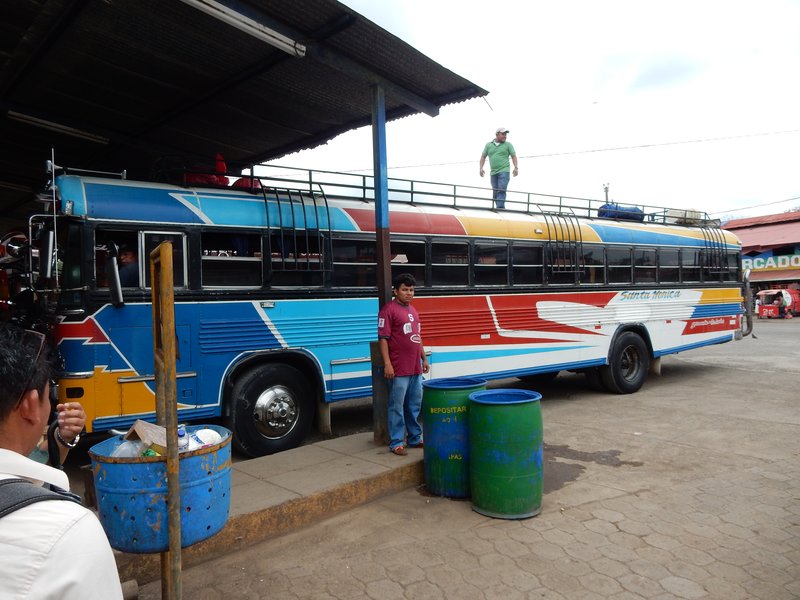 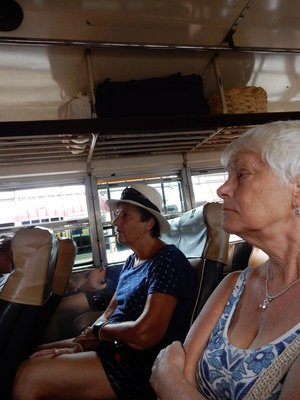 We sort of knew it was going to be a long ride when the first 25 km took about 1 1/2 hours to transverse. This was a long distance bus for us, but it was the normal getting home bus for the locals, so we stopped at just about every 2nd tree to pick up or drop off passengers. At least the seats were comfortable and there was plenty of leg room, even for me. It was not air-conditioned, but there was a fair breeze coming in through the windows so although the travel was slow, it was not uncomfortable. Throughout the journey we all had 2 seats to ourselves intermittently shared with oncoming and offgoing passengers.

At one stop, the bus conductor (guy collecting the money and loading the luggage), there were great huge heavy tubs loaded onto the roof of the bus. This was done by 2 other men lifting the tubs onto the conductors head. With this load he scaled the bus loading ladder and passed the big tub to men waiting on the roof, this was done with the great weight balancing on his head. A man sitting next to Lyn advised us it was queso (cheese). I was impressed, especially when he repeated this action about 15 times lifting the tubs up onto the roof.

The trip continued and continued and continued. We witnessed a beautiful sunset, I took photos through the dirty bus windows. Darkness fell as the bus continued, stopping and starting as it picked up and dropped passengers. The end of the line finally came just before 10pm, after we had driven through a very quiet and deserted looking Granada.

Not having any idea where the hell we were, the bus stopped in a back street with no visible street signs. The conductor pointed us in the direction of the central plaza so we started to walk in that direction. I had pre booked our hostel accommodation, thank god, and had a map that I could follow from the central park. There was a security guard standing on the corner so I asked him for directions to Calle Estrada, he did not know but did not hesitate to flag down a passing car to get directions. Luckily for us the driver spoke English and shouted out the directions to us. Another plus we were not far from the hostel and only had to drag our luggage for about 10 minutes.

We checked in and were shown to our room. First up was a coffee and tea, even though we had not eaten since the early lunch none of us seemed to mention needing any food. It's surprising how exhausting sitting in a bus for 7 hours can be. After 3 tepid showers we went to bed, it was midnight by now and although we had all 'napped' in the bus we still seemed to feel buggered.

Catching up on internet, I posted photos until about 1am and then crashed.